Class of 2021 Valedictorians and Salutatorians 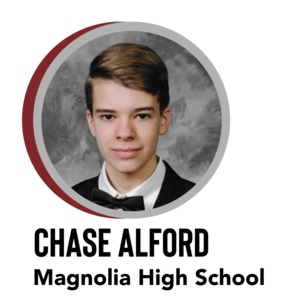 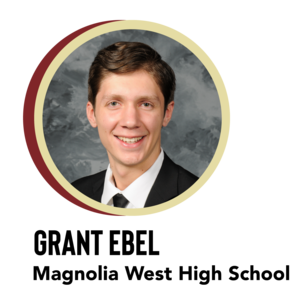 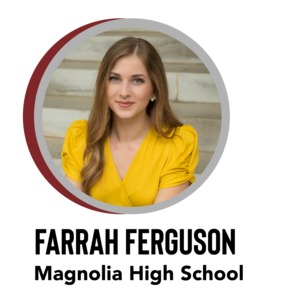 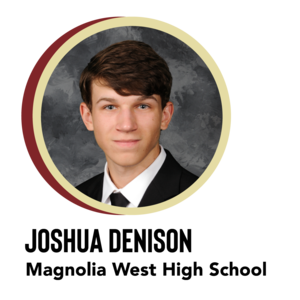 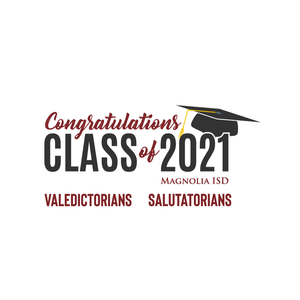 Congratulations to each of these students on graduating with top honors
Valedictorians
Chase Alford
Magnolia High School
Magnolia High School Valedictorian, Chase Alford, will be attending the University of Texas at Dallas this fall to study mathematics. Chase is a National AP Scholar. He has been involved in National Honor Society and Mu Alpha Theta Mathematics Honor Society. Throughout high school, he has participated in several UIL Academic events, including Computer Science, Mathematics, Number Sense, and Calculator Applications. He has served as the instructor for the last three of these for a majority of his time at school and has advanced to the state competition in each of these three. Chase has been a member of the wind symphony and marching bands on French horn and mellophone each year. He enjoys blind juggling, numbers juggling and unicycling in his spare time.
Grant Ebel
Magnolia West High School
Magnolia West High School Valedictorian, Grant Ebel, is an International Baccalaureate Diploma candidate who will be attending the University of Texas at Austin to study Biology. Grant has been accepted into the College of Natural Sciences' Dean’s Scholars Honors Program and plans on attending medical school to become a physician. He was the President of the Interact Service Club, Vice President of the National Honor Society, and volunteered for over 400 hours. Grant has been designated as a College Board Small Town and Rural Scholar, an AP Scholar, and was awarded the University of Houston’s Rising Star Award for Science and Engineering. He was the Most Outstanding Student for IB Physics, IB Theory of Knowledge, and Debate. Grant was also involved in the Superintendent’s Student Leadership Group, Spanish Honor Society, Mu Alpha Theta, and Stang Gang. He has volunteered as a Youth Basketball Coach, Elementary Chess Club Coach, and Math Tutor. Throughout his high school career, Grant has been involved in Science Fair and UIL academic competitions, winning awards at the district, regional, and state levels. Grant’s passion to help and give back to his community shined as he worked as a camp counselor, waiter, events worker, and county election clerk over the summer and during the school year.
Salutatorians
Farrah Ferguson
Magnolia High School
Magnolia High School Salutatorian, Farrah Ferguson, will be attending Texas A&M University in the fall. Having been awarded various scholarships, she will be pursuing an industrial engineering degree as part of the Engineering Honors program. Farrah is a National AP Scholar with Honors and has also earned the distinction of being a National Recognition Small Town and Rural Scholar. She has been actively involved in numerous school organizations. Currently, Farrah serves as president of National Honor Society and Science National Honor Society as well as the treasurer of Mu Alpha Theta. She has also been a member of the Superintendent’s Student Leadership program for the past two years. Farrah has been a ballet dancer at Boni’s Dance and Performing Arts Studio for 15 years. As part of the pre-professional ballet company, she has held the lead roles of Sugar Plum Fairy in The Nutcracker and Aurora in Sleeping Beauty during her senior year. Farrah has been a member of the Texas Topaz chapter of the National Charity League for the past 6 years. Through her involvement in NCL, Stonebridge Church, and other philanthropic organizations, she has accumulated over 400 service hours during her high school career. In her free time, Farrah enjoys cooking, spending time with family, and watching television shows, especially true crime and baking.
Joshua Denison
Magnolia West High School
Magnolia West Salutatorian, Joshua Denison, will be attending the Honors College at Clemson University to study Physics, with plans to attend Business or Medical School after completing his undergraduate studies. Josh earned AP Scholar with Distinction and Rural & Small Town Scholar from the College Board, as well as Most Outstanding AP Chemistry Student at Mag West. He scored a 35 on the ACT, putting him in the top 1% nationwide. During high school, Josh played golf for the Magnolia West Varsity Golf Team for four years, advancing to UIL Regionals twice. He was a member of the National Honor Society and has been a straight-A student since Kindergarten. He volunteered over 100 hours in the community and served as an usher at St. Matthias Catholic Church for several years.